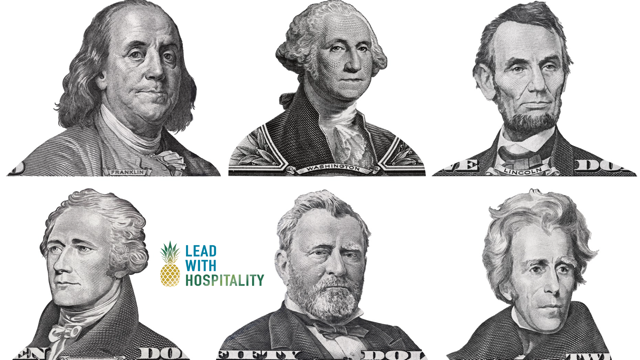 Whether it was social studies class, a high school classroom discussion, writing a college term paper, or taking in Lin Manuel Miranda’s Broadway masterpiece, Hamilton, an American Musical, most of us have been inspired by George Washington.

He certainly was quite accomplished, however who he was, as a human being, is more inspiring than anything he ever did.

By all accounts, George Washington was one of the greatest leaders in American history.  These same qualities are as relevant today as they were in in the late 1700’s and 1800’s.

Washington certainly served his country, but historians have written volumes about the passion and devotion with which he served his troops he led into battle.  He led from the front, as they say, never asking others to do anything he wouldn’t do himself.

They say he was never the smartest person in the room.  According to the history books, he often sat quietly in meetings, and he wasn’t really a well-spoken orator or inspirational speaker.  He was, however, compassionate, as story after story of his love and care for others, especially in the winter of 1777 – 1778 in Valley Forge, tell the tale of what kind of human being he was.  He stayed out in the elements with everyone else, doing all he could to keep them warm, fed with what the limited supply of food, and he did his best to lift their spirits by his presence alone.

He cared deeply for people.

George Washington was driven by purpose, over and above anything else.  That purpose was to fight for the freedom of all of those who dreamed of a new nation.  That same purpose pushed him into every battle, every tough conversation, every heated debate, and every single decision he made.

His purpose was to help, lead, guide, and create a free nation with a government by the people, for the people.  That’s all people.  All.

Respecting and Valuing Others

Washington was said to have treated people with the utmost respect and dignity in the way he addressed and conversed with them.  He also valued others, especially his closest advisors, and he made sure they knew just how much he did.

He valued John Adams, Thomas Jefferson, Benjamin Franklin, Alexander Hamilton, and others so much that each of them had the confidence to step up, speak up, lean in, and do the hard work it took to create this country’s government and financial system which has endured for over two centuries.

This is my favorite quality of George Washington, as a leader.

Historians have passed along story after story of Washington deferring to those more qualified in specific areas, welcoming advice and counsel, and encouraging healthy debate.

As mentioned above, he’s said to have been quiet in meetings, saying the least among everyone in the room.  However, he alone was who everyone looked to for leadership and ultimate decision making.

When it came time to act, he acted.

When it came time to intervene, mostly to diplomatically bridge gaps in political beliefs and unite the group, he stepped in and united all the people.

He did so using words like you, we, and us.

We’re the United States of America because of George Washington’s purpose-driven leadership.  Right up to and including (especially including) his farewell address, he made it less about himself and all about people.

Leadership isn’t about the leader.  It’s not even about winning.  Leadership is about serving people.

Thanks for leading with hospitality.

One for the road:

The image I chose for this post was purposeful. Rather than using an image of only George Washington, this image says it all about who he really was. Everything he was and everything he did was with the collective support of and for other people. He wouldn’t want the image to be of only himself. Instead, he’d want the story to be about everyone else.

Benjamin Franklin and Alexander Hamilton (his “right-hand man”) of course worked alongside Washington as contemporaries. Lincoln, Jackson, and Grant, of course came years after Washington. However, George Washington’s vision for the great American Dream and all he worked so diligently to create was purposeful and thoughtful every step of the way.

All of what he did and all of who he was laid the foundation and infrastructure for those who would come after him. Washington not only served people while he was in office, but also a nation’s people for generations well after his time here on Earth.

Peloton Leadership: Here’s What Happens When We Lead Like Ally Love