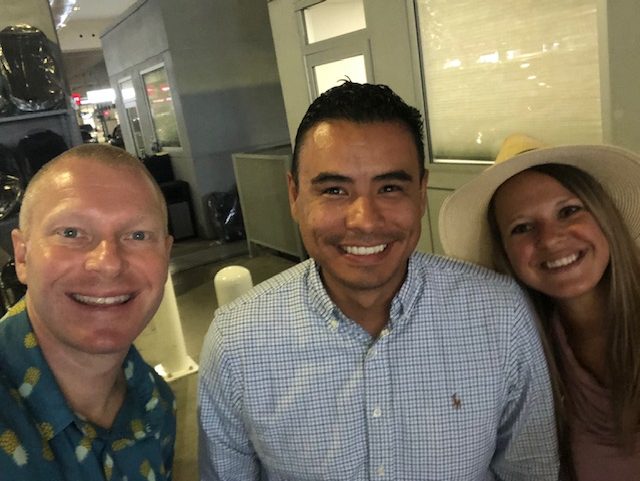 A thirty-two-year-old middle manager working for a rental car company had a tough gig.  She was in a corporate, regional role supporting multiple locations’ Operations Managers and frontline associates.  Her role was to teach, coach, consult, inspire, and motivate front line associates and leaders to maximize sales with every transaction.

One day the District Manager leveraged his talented Sales Performance Manager to switch hats and run the actual “operational” show because of some tight staffing in his operation.

The District Manager knew his role was to oversee the entire operation while liaising with his own executive leaders in the region and from the corporate office – conference calls, meetings, deliverables, and every other exhausting leadership responsibility in between.

We’ve all been there.  Corporate America doesn’t allow for a pause button if and when unforeseen circumstances creep up into our everyday reality.

He knew if he let himself get pulled all the way into the operation, he couldn’t possibly keep up and deliver for his own executives and associates in other facets of his operation.

He trusted his Sales Performance Manager to literally captain the entire operation for the day.

He knew there were things she didn’t know.  He knew she would be a bit out of her comfort zone.  He knew she might not be perfect.  But he also knew she felt welcome in that operation and she felt comfortable with him.   That was enough for him to give her the keys, trusting her with the team, the people, the processes, and ultimately the bottom-line results they needed to deliver that day.

He huddled her up, gave her some top line, overarching parameters and guidelines, and simply gave her the autonomy to run the show.  Admittedly she was nervous and borderline panicked when she arrived to work that day only to find herself left with the tallest of tasks in front of her.

However, once her District Manager, who was not even her direct boss or leader, gave her the clipboard, the keys, and the captain’s seat for the day, her confidence instantly began to rise.

She asked a few clarifying questions, and he set clear expectations.  She was honest about areas in which she had limited knowledge or expertise, and he let her know even if she made a mistake here or there, he would help her fix the situation.  Most importantly, he let her know he trusted her decision making and especially her ability to lead, inspire, and motivate the team.

He reminded her of how much she had accomplished in her short time supporting the team.  He gave her his schedule for the day should she need anything at all, and with a wink and smile said, “It’s your show.”

As she gathered herself, collecting her thoughts, all of what she’d learned from her District Manager, her Operations Manager partners, and her own Area Sales Performance leader, she flipped a switch.

It was game time.

The lights came on, starting line ups had been announced, and it was time for tip off.

The day was busy with transaction after transaction, hiccup after hiccup, and frontline associates assisting one customer after the next.  She simply leaned into her own talents, skills, and unique blend of personality, charisma, and compassion which shone brightly as her brand of leadership.

One at a time – one transaction, one conversation, one opportunity, and one challenge resolved at a time – she led the team beautifully that day.

At the end of the day when the results were tallied, sales reports reflected revenues to the tune of 150% of the location’s average daily revenue!  The District Manager gave all the credit to his Sales Performance Manager pinch-hitting, helping out her Operations Manager colleagues who were scheduled away from the operation that day.

The thirty-two-year-old Sales Performance Manager, only two years into the job, working in a brand-new industry with brand new coworkers just felt as important as the CEO of the company, all because her District Manager led with hospitality.

He had already spent months making sure she felt welcome and comfortable.  On this day, however, he trusted her with the keys, and in doing so, made her feel important.

To this day that Sales Performance Manager tells story after story of how important she felt that day, and how great she felt about herself and her team.  Her confidence continues to exude with every phone call, meeting, coaching session, and conversation with a customer.

Perhaps most inspiring is her overflowing sense of joy, passion, and commitment to that very team.

And it’s all because of how she feels when she goes to work, which is all because the District Manager, and all her leaders, always have and continue to lead with hospitality.

I know this story and the characters in it so well because that thirty-two-year-old Sales Performance Manager is my wife.  I’ve listened to stories, seen the peaks and valleys, and watched proudly as she goes all-in, giving of herself, her time, her energy, and her commitment to her teams, her leaders, and her company.

I’ve even seen her moved to tears when downloading sales reports reflecting improvement and bottom line results they’ve worked so hard to achieve.

I can’t help but become inspired by her effort as well as her leaders‘ constant compassion and commitment, as they truly lead with hospitality.

It’s also no surprise that this particular location is one of the most successful, profitable, and thriving cultures in the entire organization.

Make Sure Your Team Feels Important

When we make our teams feel important, some cool things begin to happen.

They will feel valued, and in turn, become loyal to your cause.

They’ll be loyal to the organization because they will become emotionally invested and connected to its people, mission, and purpose.

When talented people become committed and purposeful, the sky is the limit for their success, happiness, and contentment.

That bodes well for the results they’ll deliver, over and over again.

Who will feel important after a conversation with you today?

If Your Best Employee Left Tomorrow, What Would You Tell Them?