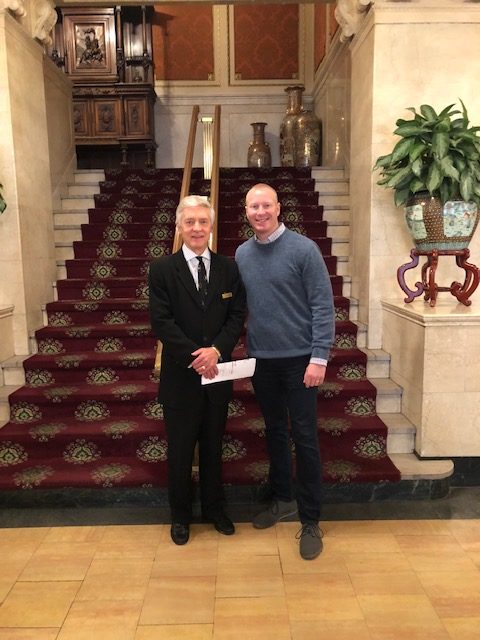 Four Things I Learned Working at The Brown Hotel in Louisville, KY

One year ago, I made the leap into the consulting business.  My first client was The Brown Hotel, a 4-diamond historic hotel in Louisville, KY.  The General Manager, Brad Walker, who hired me for the project gave me clear direction and expectations for my role.

From the word, “go”, he was very clear.  He needed me to simply be an extra set of hands during a busy Fall season – large group business, city-wide events, and the 2018 Breeder’s Cup at Churchill Downs.

During my time, he asked me to help the executive team by streamlining processes, enhancing experiences for Guests and staff, and provide added leadership presence with the valets on the front drive and with the team in the storied J. Graham’s Café (the birthplace of the famous, Kentucky Hot Brown).

Mr. Walker, a Cornell Hotel School grad and an old school hotelier, has a passion for all-things hospitality. He also has a certain presence about him.  I found myself watching, listening, and hanging on his every word from the time we first met via Skype, during my interview process.

While he hired me to teach, coach, and help members of his team, I’m the one who walked away with an education.

Here are four things I learned – specifically about serving others– working at The Brown Hotel one year ago, which may also help you or someone on your team.

Get in the sauce.

Mr. Walker told me, “I want you in the sauce,” with the people, having conversations, asking questions, listening, observing, and serving them and our Guests along the way.

Getting in the sauce was not only the best way to learn, connect, and help the team, but it was also the best way to serve everyone! I served everything from food to valet and bell services while also serving employees, new leaders starting out on their leadership journey, and delivering a service to my client, Mr. Walker, who hired me in the first place.

The only way I was able to deliver great service was to get in the sauce.  Same goes for you, as the leader of your team.  When you’re in it – really in it – with your team, every step of the way, you learn more, observe more, connect more, and do more; all of which helps you serve more, as the leader of the team.

Never put your hands in your pockets.

Mr. Walker had a few rules, but none were more important to him than this one.  “At no time should you ever…I mean, ever…have your hands in your pockets, while you’re in the Guest areas.”

I was in trouble.  I was the world’s worst for putting my hands in my pockets!  Not anymore.  Mr. Walker schooled me on what kind of message that sends to not only Guests, but also other team members.  It tells them you’re “just there” instead of “there to help and be of service.”

A few months ago, while creating a leadership development workshop on emotional intelligence (Self-Awareness, Self-Management, Social Awareness, and Relationship Management), I came across a behavioral psychology study.  The study suggested hands-in-pockets send non-verbal cues that we’re hiding something, lack confidence, or insecure.

When I read the article, I immediately thought of Mr. Walker and my time at The Brown Hotel.  No more hands in pockets.

(in this case, it was not only hospitality but also bourbon.)

On Day One, Mr. Walker asked me if I drank bourbon.  My reply was, “Not really.”

Mr. Walker schooled me yet again, encouraging me to learn what makes bourbon, bourbon; as well as a bit of the history of the great American spirit, which was first created right there in Louisville, KY.

He said, “Since you’re in Louisville, you’ll need to know your bourbon, because our Guests will ask you about it.  You need to be knowledgeable.  You’ll have a day off in a few days, so go taste some bourbon and do a distillery tour, to learn.”

Well, I followed orders.  I not only learned what makes bourbon, bourbon but I also learned I like it!

If you’re interested, all bourbon is whiskey, but not all whiskey is bourbon.  In order for whiskey to officially be bourbon, it must check all of the following boxes:

On busy weekends, in the café, we had a buffet breakfast with incredible food, carefully prepared and of course beautifully presented. Imagine pure, wholesome southern hospitality.  This was everything you’d imagine it was.

One crazy Sunday morning, I was helping the team up front, assigning tables, seating Guests, and charismatically refilling dishes of breakfast potatoes, bacon, and/or biscuits and gravy on the buffet. It was absolutely nuts in the restaurant, with Guests waiting in the front of the restaurant and in a line out into the lobby, just to come in and put their name on the list.

On my way back through the restaurant, after seating a family of four, I thought I’d swing by the buffet to see what needed refilling.

Mr. Walker, the General Manger of The Brown Hotel, was literally in the sauce.  He was freshening up the buffet, surveying the landscape, and literally stirring one of the dishes.

I made eye-contact with him, and he didn’t even need to utter the first word.

Thanks to Mr. Walker and the entire team at The Brown Hotel.  The Fall Season of 2018 is a season I’ll never forget.

In fact, in a coffee shop next door to The Brown Hotel one year ago, is where and when I created this very blog and website.

PS: I learned (or, was really reminded of) a fifth thing. There’s no place like home. Born and raised in the great state of Kentucky, I’m so very grateful and proud to have been a part of the team at The Brown Hotel, if only for a season.

First Choose HOPE, Then Spread It