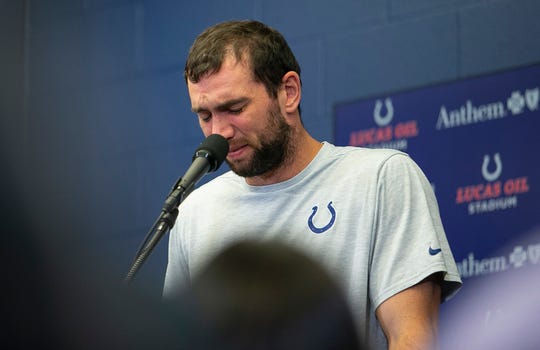 The night Andrew Luck shocked the world, announcing his retirement from the NFL at the age of 29, sports broadcaster, Doug Gotleib, tweeted, “Retiring cause rehabbing is “too hard” is the most Millennial thing ever. #AndrewLuck”

Since the tweet, many have tweeted back, ripping Doug Gottlieb for the grossly inappropriate, distasteful comments.

The conversation continues in the sports talk radio space and on social media.  I’ve seen tweets back to @GottliebShow from Millennials alluding to his behavior as “the most Gen X thing ever”.  Others allude to behaviors as, “the most Baby Boomer thing ever.”  Sure, these are tongue-in-cheek comments, but we all know and feel the consistent, cross-generational divide in society these days.

The banter between Gen X-ers and Millennials and the comments from Baby Boomers to both of their generational counterparts on social media is just a microcosm of what happens in the workplace.  We’re in a special time right now with up to five generations represented in the workplace.

I was born in 1979, so I’m right on the border between the Gen X and Millennial generations.  According to The Center for General Kinetics, here are the birth years for each generation, and depending on the organization, up to all five can be present among any given team in Corporate America:

While I truly do understand both Millennial and Gen X tendencies, thoughts, comments, and behaviors, Doug Gottlieb’s tweet definitely got me thinking.  Not only was it annoying, it made me think about Andrew Luck, the person.

Here’s an unbelievably talented, respected, and hard-working young man whom in the first three years of his career, was knocked down (hit or sacked) 352 times.  That’s more than any other player during that span.  Andrew Luck has battled through the following injuries during his time in the league:  torn cartilage in two ribs, a torn abdomen, a lacerated kidney (he literally pees blood from time to time), a concussion, and a torn labrum.  Most recently, during this pre-season training camp, he’s worked through an ankle injury.

Everyone’s job is tough, but Andrew Luck has certainly dealt with his share of “stuff” over the years.

Here’s what stuck out for me though.  The way he has handled it all.

Through it all, Andrew Luck, with his Stanford degree, passion for learning, reading, (he’s vowed to read all The Game of Thrones books before he watches any of the movies), and unparalleled sportsmanship on and off the field, continue to reveal his character.

Many of you may know the stories of Andrew Luck, the person.  When a teammate suffered an ACL injury, sidelining him for the year, Luck gave him the World War II epic, Unbroken to read.  Supposedly, Luck is an avid reader.  I actually read that he once read books on concrete during a team road trip, simply because he’s obsessed with learning.  Seriously.  Concrete.  ESPN and others have shared social media content this past week showcasing Luck’s sportsmanship, with highlights of him complimenting opponents for sacking and tackling him!

Though he was projected to be the number one, overall, pick in the 2011 NFL Draft, he decided to return to Stanford to play one more year while earning his degree.  The following year, he was the number one pick in the 2012 NFL Draft, and went on to lead the Indianapolis Colts to a number of playoff berths during his time as their quarterback.

At his press conference last week, the 29-year old Stanford graduate, Pro Bowl NFL Quarterback, loving husband (and future father, as he and his wife Nicole expect their first child next year), and passionate human being became emotional as he said goodbye to the NFL.  Yet people boo’d him that night, and Doug Gottlieb tweeted his comments on social media.

Andrew Luck brought passion for people and for learning to the NFL for over seven seasons.  He treated everyone, on both sides of the ball, with respect.  He also brought his own uniqueness to the game, unapologetically complimenting his opponents for literally beating him up, just because they did a great job.  He brought his true self, every single day, right up until his last day in the NFL, at his press conference when he teared up.

Andrew Luck is a human being who deserves to be happy and enjoy his life, at work and at home with his family.

As for “the most Millennial thing ever” comment, consider this.  By the end of next year, Millennials will make up 50% of the American workforce; and by 2025, 75% of the global workforce.

So statistically speaking, the most Millennial thing ever will likely be your own workplace, sooner vs. later.

Whether you’re a Baby Boomer, Gen-X-er, Millennial, or a Gen Z-er, remember there is one thing we all have in common.

Simply being yourself and respecting others for who they are, in all their glory and uniqueness, will always be the most human thing ever.  In leadership, few things will appeal more to Millennials than their leader’s ability to simply be human.  Also, as Millennials continue to grow into more senior leadership positions themselves, we can expect them to treat their teams with love, respect, and humanness.

So, the most Millennial thing ever might just be the best thing ever.

{Incidentally, thanks Millennials for: Uber, Lyft, Airbnb, Facebook, Twitter, the ability to work remotely, and for a much more purpose-driven, socially aware society.}

Have a great day, and happy retirement to Andrew Luck.

Doug Gottlieb, we wish you the all the best; but we might not listen to your radio show…ever.

I love a good ballgames to boardrooms thread so much that I wrote a book on the many lessons we learned from our coaches at a younger age, which apply to our lives today as working adults.

I wrote this book for leaders in the early stages of their careers, who are talented, passionate, and give their absolute heart and soul to their work; yet they may be feeling frustrated or stuck.

It’s available on Amazon.com and BarnesAndNoble.com

Five Reasons Every Leader Needs to Listen to Elton John