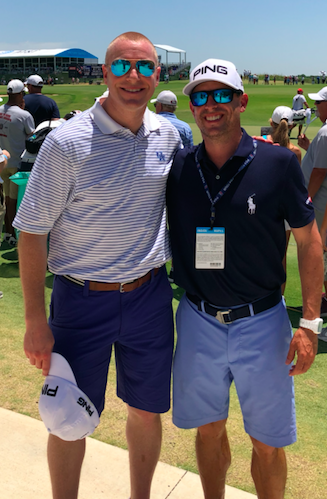 Regardless of the Season, You Never Look Bad Making Somebody Else Look Good

However, what happens to us from one season to the next is often uncertain.

We can’t always predict the exact future or how it’s all going to work out.  Unfortunately, we can’t pick and choose the cards we’re dealt, real life scenarios we get to face, the jobs we’re offered, or even the lives we get to live.

Here’s what we can do.  We can choose how we go about our day-to-day.  As we’ve all been reminded countless times before, there are things we can control and things we cannot control.

You and I both can choose to do the following.  These are all things we CAN control:

This blogpost is inspired by a recent podcast episode I published on the Ballgames to Boardrooms Podcast.  The episode features a conversation with my dear friend and PGA Tour Caddie, Matt Olsen.

In 2016, Matt found himself out of a job, as many of us often do, at one time or another in our careers.  A leap of faith, literally taking a few swings, following his heart, intuition, and passion for golf he reached out to some friends and personal contacts associated with the PGA Tour.  One conversation led to another, one leap of faith after another passionate leap of faith, and he found himself caddying in Web.com Tour events as well as PGA Tour events later that year.

As you’ll hear in the podcast episode (link below) in our conversation with Matt, he’s recently been hired by PGA Tour professional, Adam Long, for the 2019 PGA Tour season.  This will be Matt’s third year as a professional caddie, and as you’ll soon hear him say, it’s all because he had faith, took swings in leaps of faith, did his best every single day, and always made sure to do the right thing, being kind to people.

He’s earned his spot and realized his dream, working in the PGA Tour community.  In the peaks and valleys since being on tour, Matt has chosen to be himself – spirited, faithful, helpful, and cheerful – whether or not he and his golfer make the cut, make any money, or get invited back for more opportunities to perform.

Adam Long and undoubtedly many others were watching and listening all the while.  Matt has been focused on doing all he can, making the golfer for whom he’s caddying, look good!

Here’s a link to the podcast episode:

One for the road:

For fun, and to prove the concept of Practice the Future Today is real and amazing, here’s a YouTube video of Matt Olsen and me, from November of 2010!  On a road trip across the country, Matt and I pulled off the side of the road in beautiful San Angelo, TX for an impromptu “interview”!

Matt was helping me drive all of my belongings in a U-Haul, with my beloved 2002 Toyota Camry in tow, from Orlando, FL to Las Vegas, NV.  I had recently been “in transition”, as was Matt, and fortunately I was offered a job to be on the opening team of The Cosmopolitan of Las Vegas in November of 2010.  Matt, who had not only let me live in his home while I was in transition but also volunteered to help me with the drive across country, took a swing during that “season”.  He tweeted PGA Tour golfers, asking if anyone “needed a caddie” for the upcoming Children’s Miracle Network Classic, held at Walt Disney World.

After tweeting my fellow Florida Southern College alum, Lee Janzen, Lee reached out to Paul Stankowski, a PGA Tour veteran in need of a top twenty finish at the Children’s Miracle Network Classic in order to go back to q-school to reclaim his PGA Tour card.  It turns out, he also needed a caddie!  Paul Stankowski messaged Matt AS WE WERE IN THE U-HAUL ON OUR ROAD TRIP ACROSS THE COUNTRY, inviting him to caddie for him the following week at the Disney tournament.

Here’s an article which tells the story of how Paul Stankowski literally hired a caddie on Twitter, in what the article calls, “…a great week all around” and a “random moment in Twitter history.” Stankowski needed a top 20 finish for a chance to reclaim his PGA Tour card.  With Matthew Glenn Olsen on his bag as what social media called his “Twitter Caddie”, they shot a final round 66 and finished 17th!  Paul would regain his PGA Tour card weeks later through q-school.

No matter what happens, Stankowski is confident he’ll walk into 2011 ready.

For a good season or another leap of faith.

This time around? Well, he’s still laughing about hiring a caddie on Twitter. “Has to be the first time, doesn’t it?”

Indeed, we believe it was. This whole gig was a leap of faith for Olsen, too. He’d been downsized from his job just before the tournament.

“And, he had an interview that week that he moved to this week, so he could caddie,” Stankowski said.

In case you’re wondering, Stankowski didn’t accept Olsen’s offer to do it for free. He paid him standard rate, which meant Olsen collected about $4,000 for the week.

Thanks, Matthew Glenn Olsen, for the inspiration, and best of luck to you and Adam Long on the PGA Tour in 2019.  Continue being the leader you are, and when you lead, lead with hospitality!

“Have the courage to follow your heart and intuition. They somehow already know what you truly want to become. Everything else is secondary.” – Steve Jobs

Taylor is the author of the best-selling book, Ballgames To Boardrooms: Leadership, Business, and Life Lessons From Our Coaches We Never Knew We Needed as well a his forthcoming second book, Lead With Hospitality.