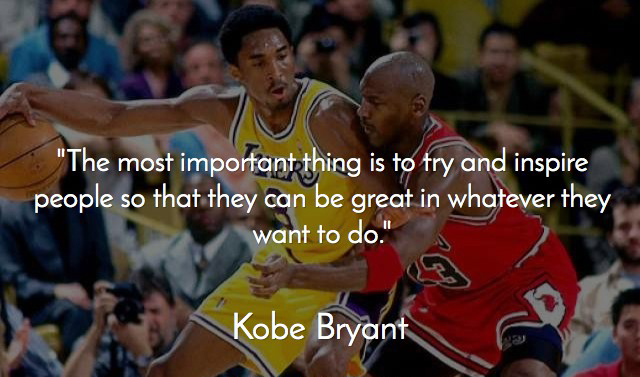 Why Do We Mourn the Loss of People We Don’t Even Know?

Why do we mourn the loss of people we don’t know?

It’s because of one simple, yet powerful word, connection.

I didn’t like Kobe when he first came into the spotlight.  My only reason for not liking Kobe was because I didn’t want anyone to ever be as good as Michael Jordan.  For those of us who grew up playing basketball in the 80’s and early 90’s, Magic, Larry, and Michael were our heroes.

Magic was, well, pure magic with the ball in his hands and he captured our hearts with his smile.  Larry was motivating with his competitive spirit combined with raw talent and innate understanding of the game.  Michael was captivating with a combination of everything Magic and Larry had, but with a little something extra, his mindset.

In 2010, I worked for a couple entrepreneurs starting a new business.  The principle investor in the project was based in Southern California. As a thank you for my contributions during that season, he took me to a Lakers game at Staples Center.

That day my feelings about Kobe changed.

The game went into overtime, and Kobe hit a 17-foot back-to-the-basket, shoulder shimmy to the left, fade-away-with-one-leg-kicked-out, and perfect-follow-through jump shot to win the game at the buzzer. It looked eerily familiar to number 23 for the Chicago Bulls in the late 80’s and 90’s.  Kobe never flinched or waivered the entire game.

I found myself watching him the entire game, wherever he was on the floor.  It was as if he said to himself, “There’s no way we’re losing this game.”

Staples went bonkers. I got chills, and I’ll be honest. I also teared up.

I remember thinking to myself, Kobe is basically my age.  He was born 51 weeks before me, August 23rd, 1978.  I was born August 16th, 1979.  When Kobe and I both were nine and ten years old, Michael was coming into his own in the league, battling Magic and Larry. Michael was winning back to back Slam Dunk contests in the late 80’s.  In the early 90’s Michael was leading the Chicago Bulls to three straight NBA Finals championships.

All the while, in our driveways, on playgrounds, and in summertime basketball camps, we all pretended we were Magic, Larry, and Michael.

If you’re 38 to around 41 years of age, you’re probably thinking what I’m thinking.  You would have been friends with Kobe in high school.  I’ve often thought about what it would have been like to just sit and watch games with Kobe, breaking down everything from the way people dive after loose balls to the smell of popcorn at the concession stand.

Kobe has me by about five inches in height and he has about 1,200% more talent.  Obviously, he made the jump directly to the NBA after high school while I made the jump to the freshman dorms at Florida Southern College. Kobe played on basketball’s biggest stages, and I was a really scrappy practice player for a top ten NCAA Division II program. I also made amazing batches of Powerade for the team, most afternoons before we took the floor.

But I’ve always felt a connection to Kobe.  From age eight to eighteen, I studied all the basketball highlights, documentaries, and especially every basketball game I could possibly watch.  Judging by the way Kobe played, he watched and studied those same highlights.  Kobe was the early 2000’s and 2010’s version of Magic, Larry, and Michael.

When we all got the news Sunday morning or afternoon, we didn’t get sad because we lost a basketball player. Our heartbreak is because of something bigger than a game.  We lost a person; a human being with whom we had a connection.

By all accounts, while Kobe was and will always be one of the best players ever to play the game, he was also a husband, a father, a friend, a fan, and most of all, an inspiration.

As soon as we realized Kobe and Gianna were gone, we didn’t think about his two jerseys hanging from the rafters in Staples Center.  We thought about Vanessa and his family.

Kobe is gone, but he will never be forgotten.  His legacy extends and reaches well beyond the game of basketball.  As great as his basketball talent was, his work ethic, heart, and passion to teach, coach, mentor, and inspire others have become the real story.

The same is true for every one of us.  The stories of our lives are less about what we accomplish and all about who we’re becoming.

Kobe had a great career, but he became a great human being in the process.  That’s the story of Kobe being told now and forevermore.

That’s why we mourn the loss of people we don’t know.  It’s because we’re connected to the humanness of their story.

Once again, Kobe continues to inspire us from Heaven.  Not with his accomplishments, but with who he became while he was with us.  Now, you and I are inspired to make each day count and become our best.

Kobe, I’ll meet you on the playgrounds one day.  Save me a spot.  I’ll run the point, and you can just spot up and knock down jumpers.

I’ll be Magic.  You can be Michael.  You two have the same mentality.  The Mamba Mentality.

Thanks for being the best you could be, and thanks for inspiring all of us to become the best we can be.

PS – Connection is just one of the leadership traits athletes, coaches, and the game have taught us.

I’ve compiled all my favorite lessons in my book, Ballgames to Boardrooms.

These Five Words Will Get You Out of Your Rut